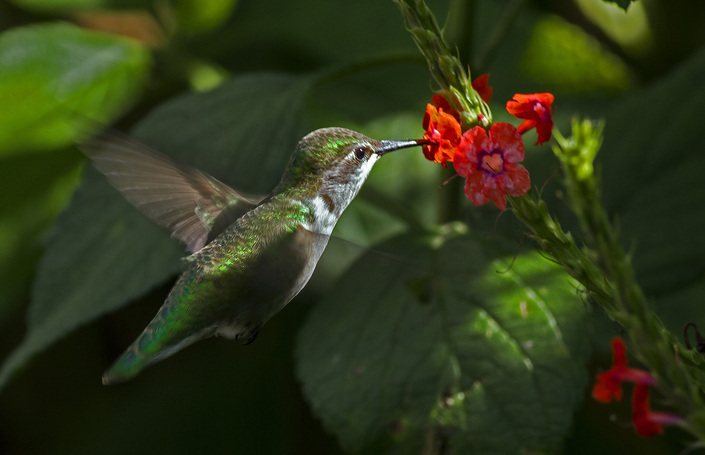 Black-Chinned Hummingbird, female -
I like this shot of a female Black-chinned Hummingbird because of the light. The bird is in a shady spot but I was able to catch it in a dappled sunbeam which shows up  its irridescent green back feathers while blending in with the lush green vegetation around it. The red flower from which it is drinking nectar nicely breaks up the otherwise overwhelming greens. 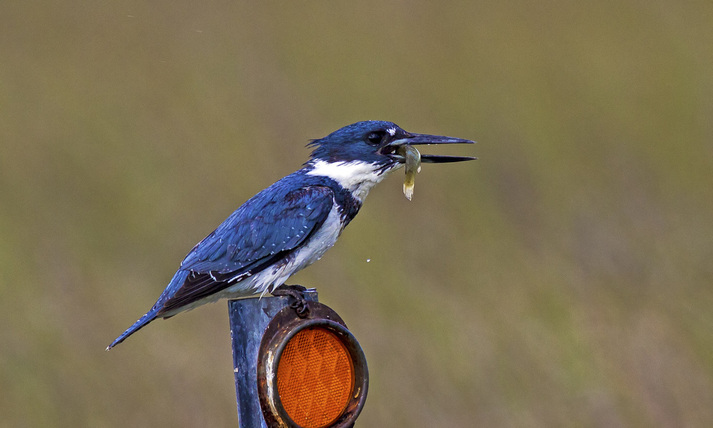 Belted Kingfisher - megaceryle alcyon
This Belted Kingfisher perched on a convenient roadsign in the Everglades National Park. From here it made frequent dives into the swamp pools to catch fish, and from our observations it never missed, there was always something in its beak. Aided by its ability to hover this successful species is N. America´s only kingfisher. 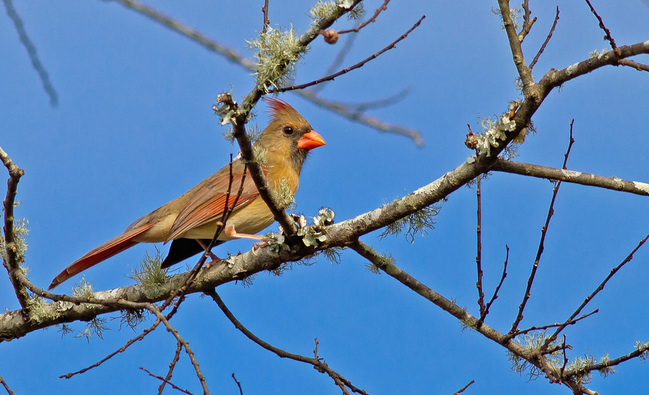 Northern Cardinal female - cardinalis cardinalis
Mike and Cathy´s farm is in an amazing place. Ten acres of some of the World´s best pasture for their wonderful horses, and plenty of oak trees draped in Spanish moss provide a haven for all sorts of birds. This female Cardinal made an elegant picture in the winter branches of a garden oak tree.

Her male partner is a vibrant red colour and the species is so named because of the bright red robes worn by cardinals of the Roman catholic Church. 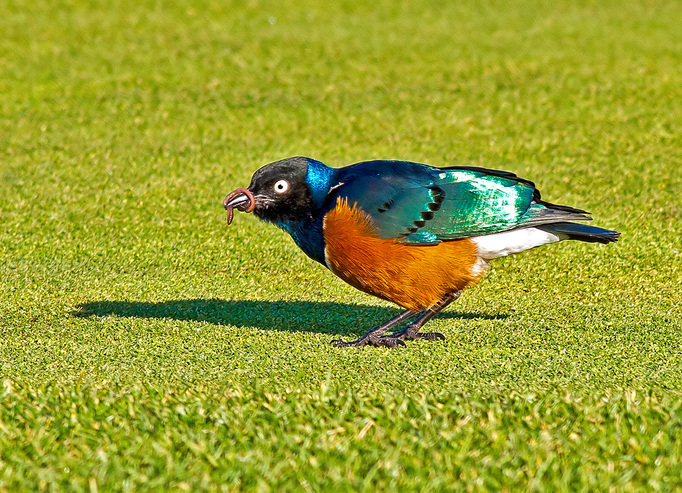 Superb Starling - Lamprotornis superbus
This Superb Starling lives on a golf course in Malaga where it finds a ready supply of earthworms on the watered greens and fairways.


It makes a very colourful picture for February as the sun caught the metalic blue/green of its upper plumage, contrasting nicely with the pigmented orange breast. Also the bright white iris and the worm around the beak provide a focal point in what would otherwise be a fairly uninspiring composition. 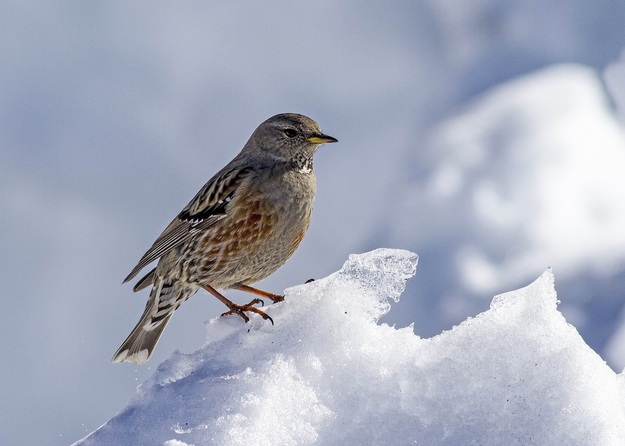 Alpine Accentor - prunella collaris
One of my favourite birds of Spain is the Alpine Accentor which lives high in the mountains between 1800 and 3000 metres. Many people will therefore never come across this delightful species, but those of us who like high places for skiing and hiking will find them where few other birds will exist.

Alpine Accentors are social birds which are polygnandrous. That is a heirarchical male society in which males and females attempt to mate with all opposites within the group, but the dominant alpha male may prevent some couplings, usually with lower ranked males. Males provide food to all nests where there is a possibility of him being the paternal male. Females however only rear chicks from eggs that they have laid. 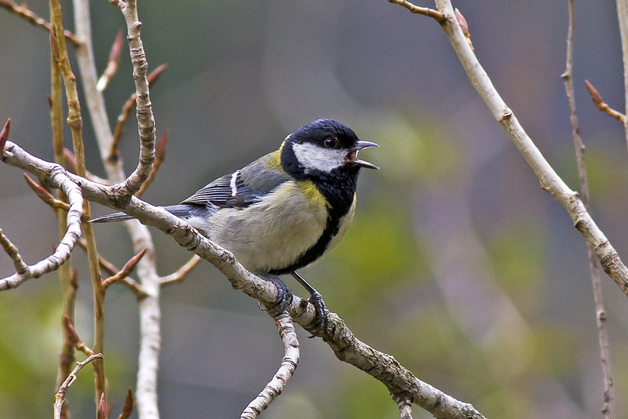 Great Tit - parus major
A very wet and dull Spring has not been good for birding so far. Also being without a camera while it was away being repaired has not helped. However the sun has put in an occasional appearance and this Great Tit photographed in the woods behind the picnic site at Alcaucin looks colourful enough to post as a photo for March. Hopefully better to come. 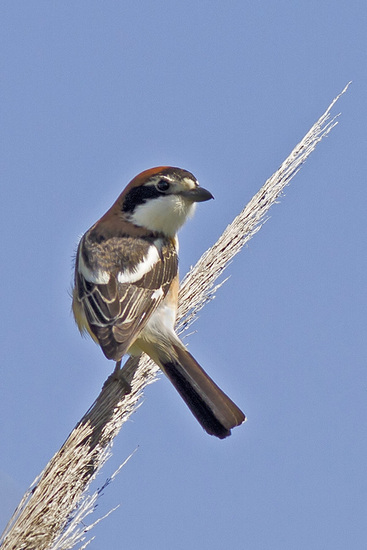 Woodchat Shrike - ianius senator
March came and went with a whimper. A soggy month with too much rain and wind for much successful bird photography. The only migratory species that has arrived in abundance is the Woodchat Shrike. This colourful species is quite easy to spot as they perch in open conspicuous places, watching for large insects or small mammals and reptiles to prey upon. They are reputed to impale prey on thorns or barbed wire as a so-called larder to return to, giving rise to the "Butcher Bird" label. I have never observed this and would be interested to see or hear from anyone who has. They are particularly numerous close to water and this one was captured alongside the Rio in Torrox Costa. 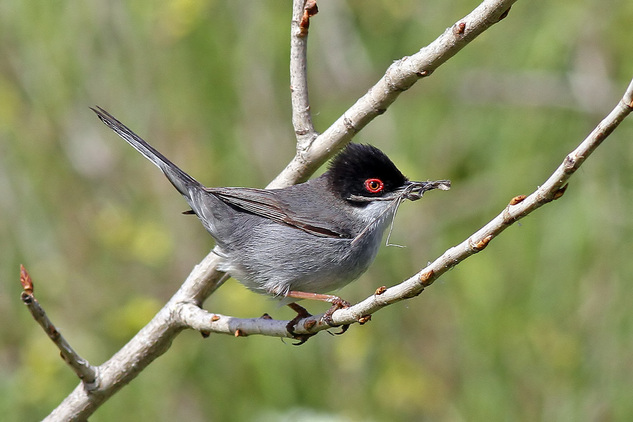 Sardinian Warbler -
Another walk along the Rio in Torrox, looking for the elusive Subalpine Warbler, but had to settle for the much more common Sardinian Warbler. However he posed so nicely with a beakful of plant matter for the nest, his red eye almost glowing in his black head, that I chose to make him the first gallery photo for April. I can only hope for something more exciting later in the month. 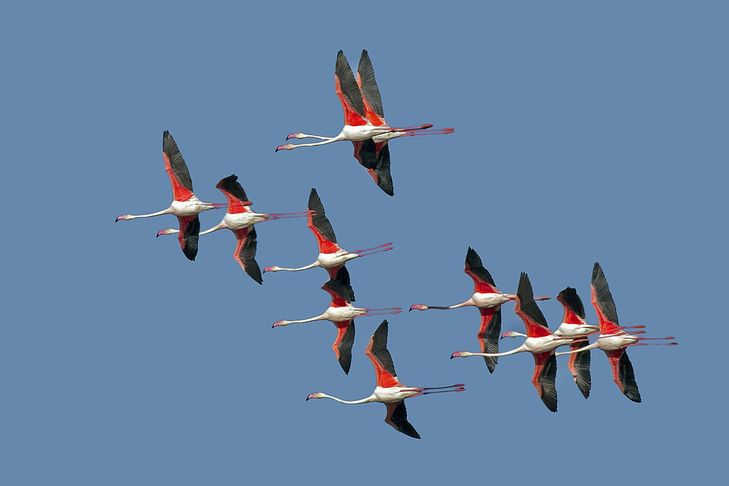 Greater Flamingo - phoenicopterus roseus
Flamingos are always spectacular but to me they are most exciting in flight. With necks extended forward and long legs trailing behind they are an imposing sight.

I caught this group circling around looking for a suitable landing at Guadalhorce. I like to think they may have just arrived from Africa. 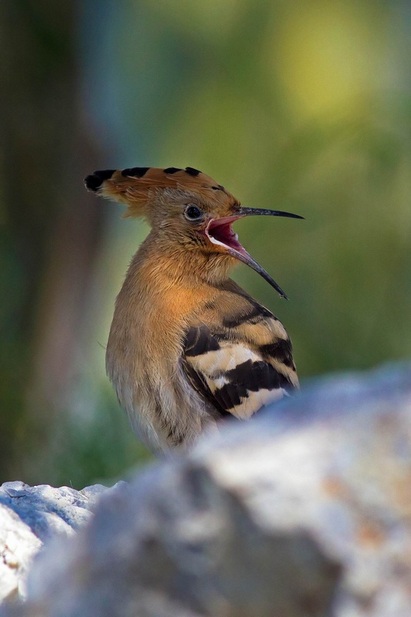 Hoopoe - upupa epops
April came and went with a whimper. An unusually wet and cold month for this part of Spain which dampened the birding, and poor light also affected the photographic opportunities.

May started well though and warmer weather brings the birds out. I caught this juvenile Hoopoe near the Church at Guadalmar. There were several of these youngsters foraging along the roadside bank probing the soft soil for grubs. They are obviously the result of a successful brood, and they were less wary than most adult birds, which was good news for me.

I quite like this pose with open bill looking backwards, and the bokeh is a nice soft green with hints of yellow and blue. White "Lips" show that the bird is very young, probably fledged this season, which is encouraging given the poor weather conditions we have had.

Hopefully May might produce more and better, but this is a good start to the month. 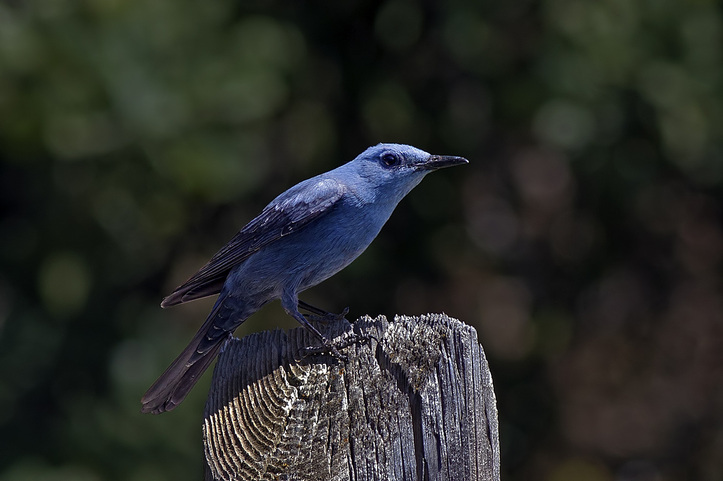 This male Blue Rock Thrush and it´s mate were the only residents of an large unfinished apartment block. in the high sierra town of Orgiva.

Spain is littered with abandoned building sites since the property bubble burst in 2008.

Oh well, every cloud has a silver lining, at least someone moved in.

Lesser Kestrel - falco naumanni
Despite its obvious similarity, the Lesser Kestrel is not closely related to its larger namesake the Common Kestrel. Perhaps there is some form of adaptive advantage to the similarities as if would-be predators confuse it with the larger species they might consequently avoid it.

This is one of a colony that nests and roosts on the old bullring in the Extremadura town of Trujillo. 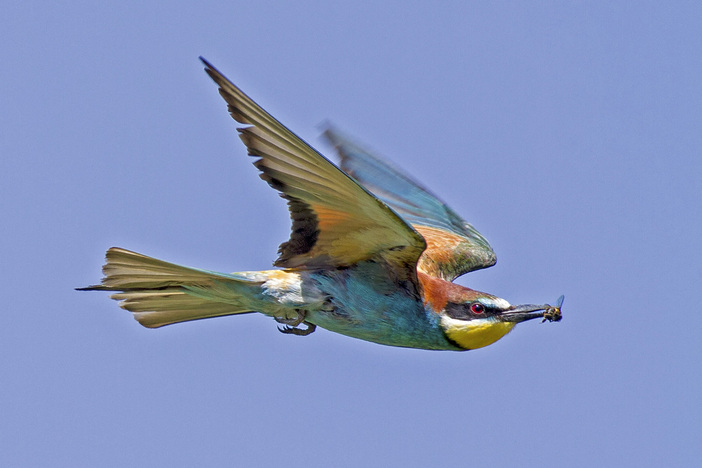 Bee Eater - merops apiaster
A nice in-flight shot of a Bee Eater, on its way to the nest with a bee for the young. The nest is in a tunnel burrowed into a sandy bank.

Bee Eaters will hunt any type of flying insect but honey bees make up a third of their diet. Before eating a bee or wasp the insect is knocked against a hard surface to remove the stinger and pressure is applied  to squeeze out  most of the venom. 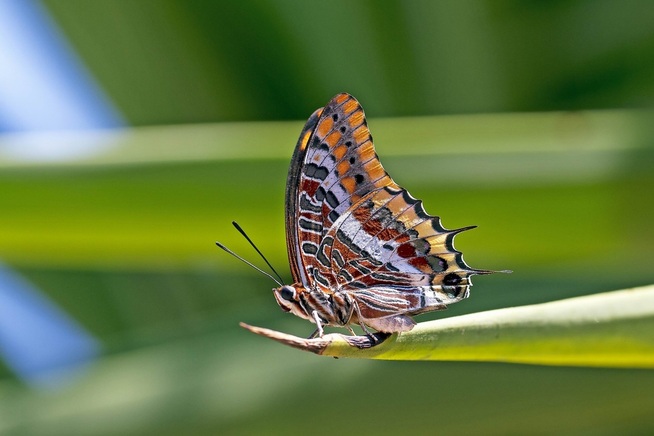 Two-tailed Pasha - charaxes jasius
Here is another cracking insect, the exotic Two-tailed Pasha. This is primarily an African butterfly but is found along the Meditteranean Coastal regions of Europe. Lucky for me, as I discovered a colony not too far from home and I think it makes a fine subject for August´s photograph. 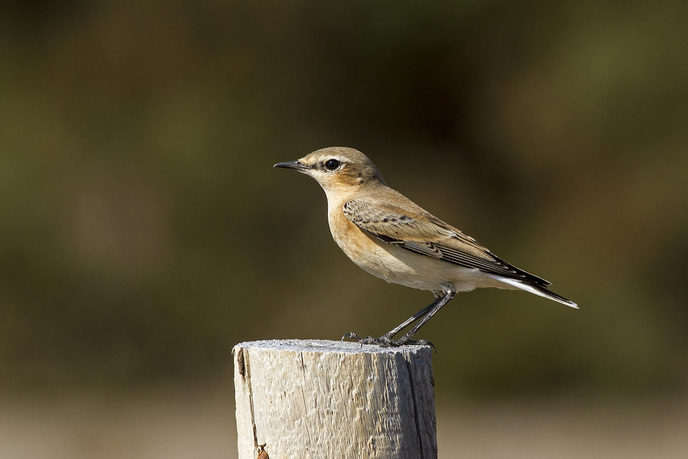 This little Northern Wheatear posed nicely on a beach fencepost at the Guadalhorce Reserve in Malaga. The morning light was good, bringing out the subtle orange tones of a very pretty little bird. An enjoyable moment in time captured for posterity. The Wheatear is not a rare or hard to find bird, but it is very attractive and worthy of another gallery spot this month. 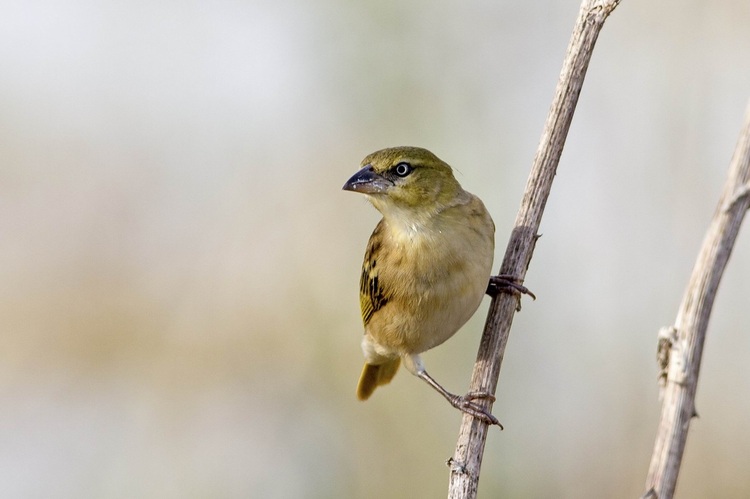 Black Headed Weaver female - ploceus melanocephalus
The Black Headed Weaver is a super little bird. It is an African species but several thriving colonies exist in Southern Spain. This one had some intricately woven nests hanging from the branches of a large tree. To cap it all nicely there was at least one male Yellow Crowned Bishop sharing the site with his Weaver cousins. 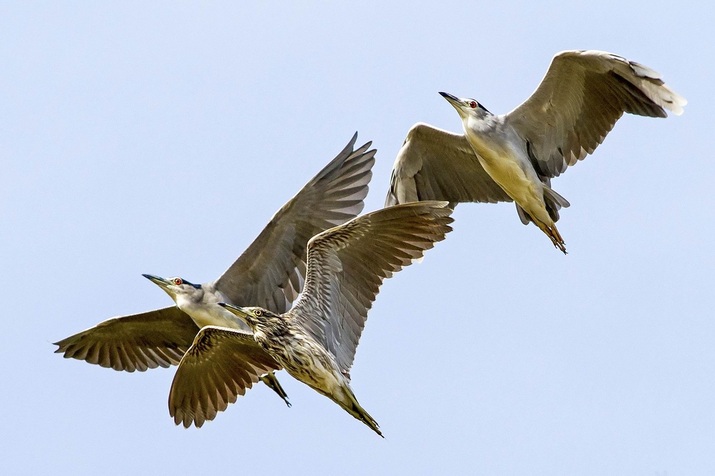 Night Heron family - nyctorix nyctorix
A trio of Black-crowned Night Herons circling around their roost, which happens to be the same pondside tree in which the Weavers were nesting. I like to think that this is a family shot of two adults and one offspring. I like the eyes of this species, varying from bright red through orange to yellow they are a very distinctive feature. 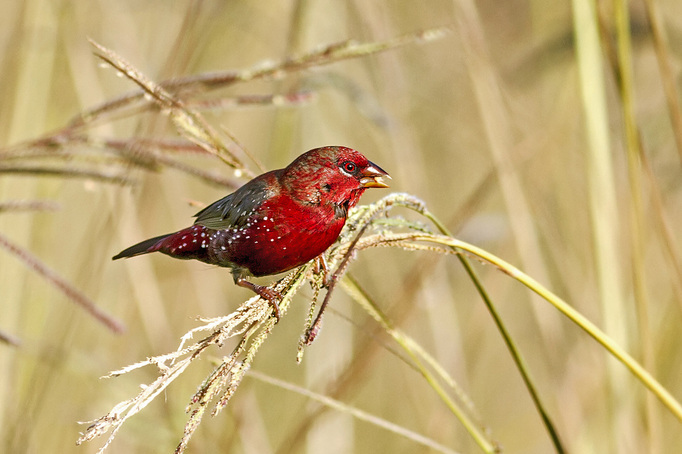 Red Avadavat - amandava amandava
This silver-studded Red Avadavat male looks like a sparkling ruby set in gold as it feeds in the tall yellow grass.

It is only the breeding males that are this full vibrant red. Non-breeding males are mostly slate grey with a red rump, albeit still with that wonderful silver studding.

Flocks of these escaped cage birds from India are established in Southern Spain. This is one of a large colony near Motril, in the province of Granada 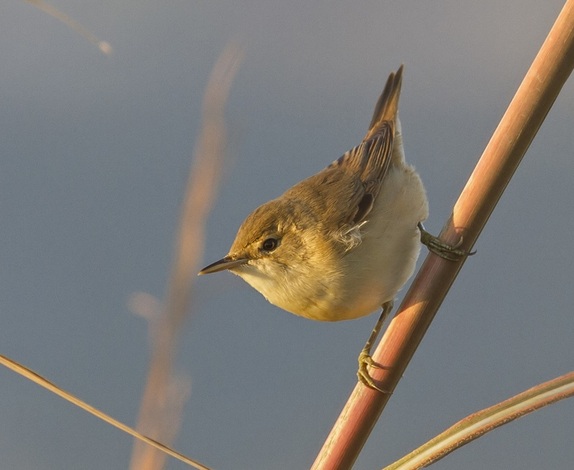 Reed Warbler - acrocephalus scirpaceus
The Reed Warbler is a typical "LBJ", birder´s speak for "Little Brown Job". It is expert at clinging to near vertical reed stems, searching for insects and small snails. They are Summer visitors to Europe & migrate to sub-Saharan Africa in Winter. They are one of the species brood-parasitised by the Common Cuckoo, along with meadow Pipit and Dunnock. It is remarkable that such relatively small birds are targeted by a bird as large as the cuckoo. The fledgling cuckoo is many times the size of it´s adopted parent birds.

This bird was photographed in the wetlands around the the Rio Guadalfeo between Motril & Salobrena. October is very late to be seeing Reed Warblers. 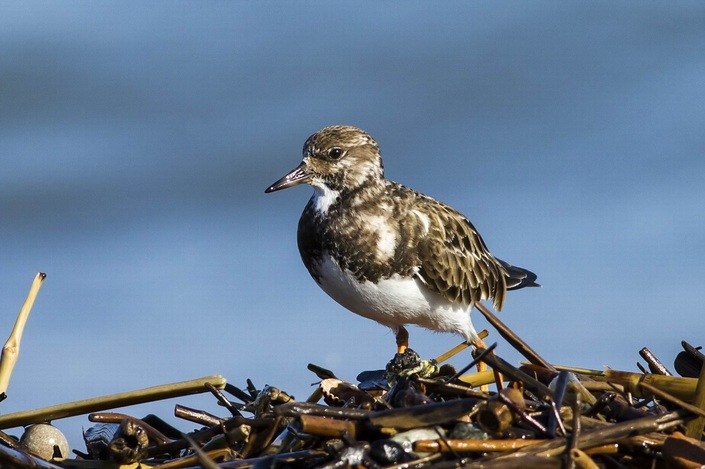 Turnstone -
This Turnstone on Guadalmar Beach provided a close-up opportunity in good late-afternoon light. Finding plenty of tidbits amongst a heap of storm detritus meant it was too busy to worry about an approaching human, even one wielding a camera and long lens.