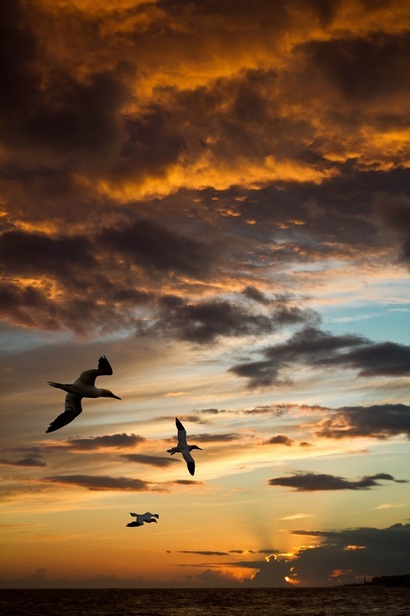 Norhern Gannets - morus bassanus
Three Gannets making use of the very last of the daylight.

68% of the world gannet population breeds around the coasts of Great Britain, but they are migratory and most winter at sea, extending their range south into the Meditteranean.

Seen here sillhoueted against a coulourful sky with the texture of the clouds above highlighted by a watery orange sunset, this is an impressive image worthy of the first photo of the month, November 2011. 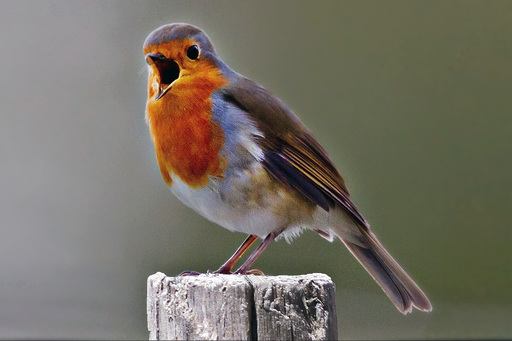 Robin - erithacus rubicula
In Britain the Robin is associated with Christmas and is used on seasonal greetings cards. It makes a charming image against a backdrop of snow which evokes nostalgic feelings of Chistmas´s past.

This one was singing loudly opposite Guardamar Church as we walked past on our way to a spot of birding at the Guadalhorce reserve. I selected it as photo of the month for December for obvious reasons. 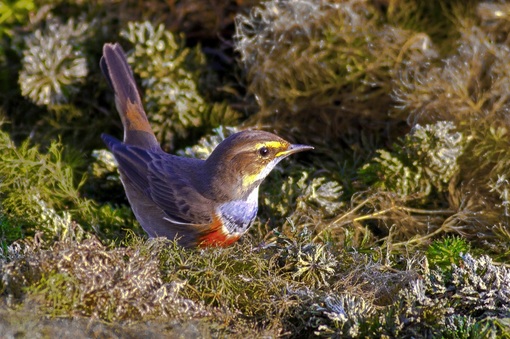 Bluethroat - luscinia svecica
The Bluethroat is a winter visitor to Southern Spain. This one spent the entire winter at the Charca de Suarez Reserve near Motril, delighting observers with close views from the main hide and providing many excellent photo opportunities.

The wardens had pulled pondweed up onto the bank in front of the hide which provided good feeding ground for many insect eating birds including this solitary Bluethroat. 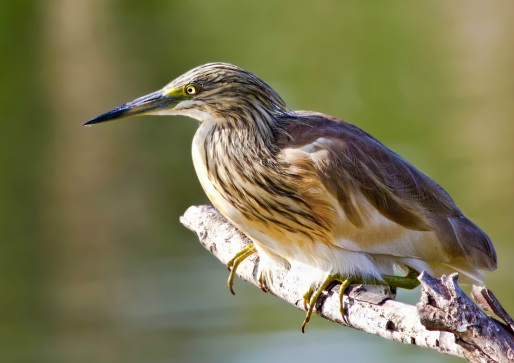 Squacco Heron - ardeola ralloides
Another visitor to the Charca de Suarez Reserve this Squacco Heron perched conveniently on a dead tree branch, allowing us to see the superb colouring and detail of its plumage and the brilliance of it´s yellow iris.

The heron´s sharp eyes pick out the insects, amphibians and fish that it catches with lightning strikes of its long neck and sharp bill. 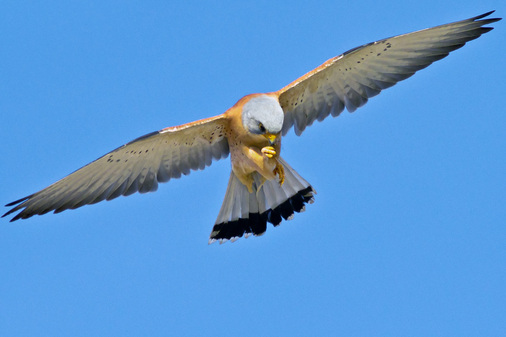 Lesser Kestrel - falco naumanni
A trip to Extremadura this month was one of the birding highlights of the year. This Lesser Kestrel was one of many that roost on the roof of the bullring in Trujillo, a charming town in the heart of "Birdland". The birds come in to roost every evening and if the wind is in the right direction they wheel and land facing the sun providing a perfect opportunity for photography.

This bird looked like it was biting its nails, it was actually examining something in its talons while virtually hovering, which provided an interesting pose. 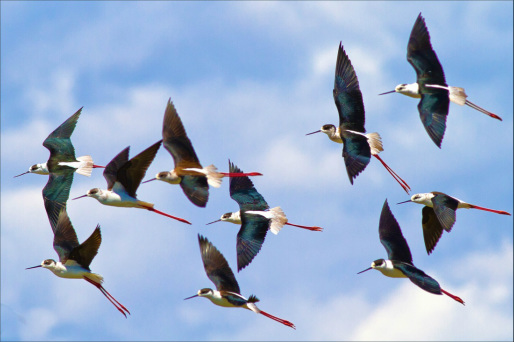 Black-winged Stilts - himantopus himantopus
Black-winged Stilts are a familiar sight on many stretches of shallow water in Andalucia. A very elegant bird with extremely long red legs which allow it to forage for food in deeper water than other waders. It feeds on insects and small creatures that it extracts from the mud with a needle fine bill. They make a fine display in flight with legs trailing and head extended forward creating an elongated profile.

In this case the sunlight caught the subtle metalic tones in their wing feathers as they took off from the Rio Velez in Torre del Mar and for that reason I selected it as photo of the month for April. 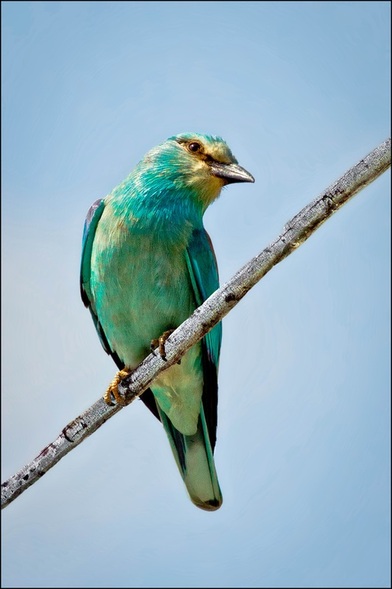 Roller - coracias garrulus
Rollers migrate into Europe from South Africa for the Summer and they are a relatively common sight in Extremadura and central regions of Spain. I was however extremely lucky to catch this bird which was passing through Frigiliana, well outside the main migration route. It was perched just down the road from my house and I happened to be passing by in the car with the camera ready on the front seat. A lucky chance and easily my choice photograph for May. 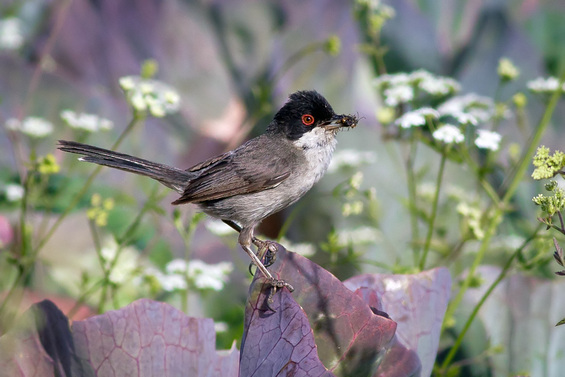 Sardinian Warbler - sylvia melanocephala
The Sardinian Warbler is one of the most iconic birds of Andalucia, A common resident, its loud rattling and tchecking call is a familiar sound anywhere there are bushes or scrub that it can forage around in looking for insects, usually low down. This one however was out in the open on a crop of red cabbages, singing loudly for a long period in order I suspect to attract a mate. An added inducement for any prospective partner was the juicy beetle it was displaying while singing, it can obviously talk with its mouth full. 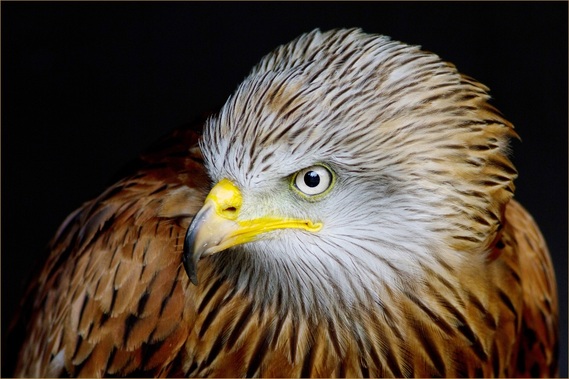 Red Kite - milvus milvus
The Red Kite has made a remarkable comeback in England and Wales. I was amazed to see so many in the Chilterns while on a two week holiday there this month and we later saw more as far across as Norfolk. This one was taken on a village green in Buckinghamshire where the locals had left chicken bones to attract them. I managed to get close enough to use some fill-in flash and was pleased with the result, so it´s my pick for July. 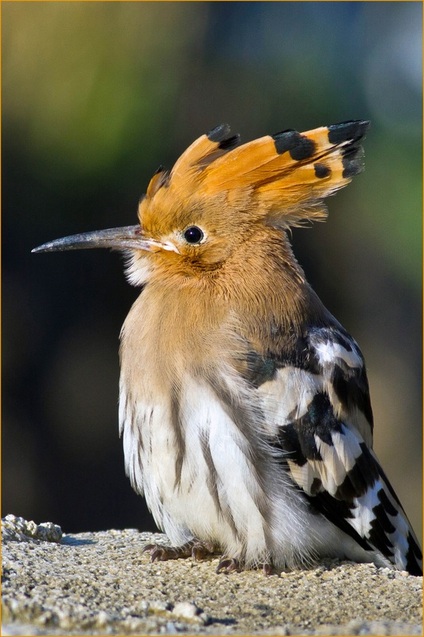 One of the most beautiful and unmistakable birds of Andalucia, the Hoopoe is surprisingly common almost everywhere. It is a very familiar sight on golf courses where the short grasses of fairways and greens provide the perfect habitat for probing the soil with its long beak seeking insects and worms. It provides a useful function in seeking out the pupae of the processional caterpillar, a nasty pest which infests pine trees and which can prove fatal to dogs that come into contact with their long poisonous hairs.  The Great Spotted Cuckoo is reputed to be the only predator of the caterpillar itself.

This photograph was from another opportune moment in the car, the bird was perched on a wall as I passed by with camera at the ready on the front passenger seat, it obligingly stayed for a photoshoot and gave me a good picture for the month of July. 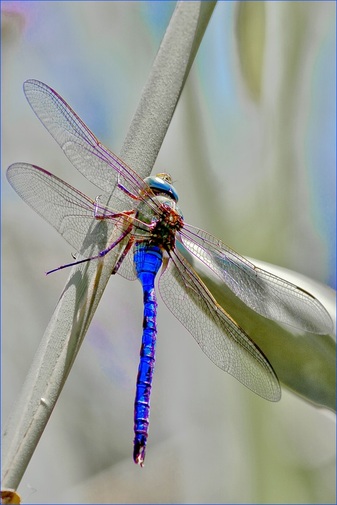 Blue Emporer - anax imperator
This month I have chosen a dragonfly as a change from the bird theme. This magnificent Blue Emporer was resting on some tall canes close to the beach at the Rio Velez. I admit to some artistic license with this photograph, I have emphasized the blue tones of the abdomen and subdued some of the background colours to highlight the insect. Naturalists would scoff but I am not writing a field guide, I´m just creating images from the natural world that please me and sometimes I like to experiment a little.

The Emporer is a fierce predator, I have obseved them grabbing other dragonflies on the wing and in one case the prey was too large to perch with so it flopped into some long grass to eat it. 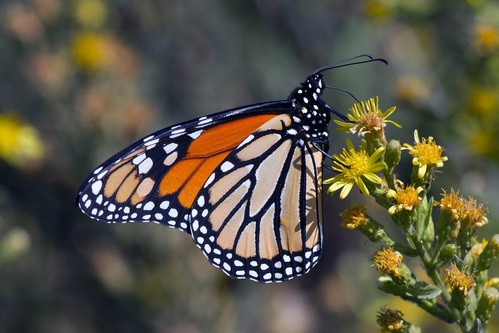 Monarch or Milkweed - dannaus plexippus
I came across a few of these stunning butterflies on some uncultivated waste land near Motril. The Monarch or Milkweed is an American migrant that avoids predation by assimilating poisonous chemicals from the milkweed plant that the brightly coloured caterpillars feed upon.

The Monarch is established in a very few places in Southern Spain, mostly in the province of Malaga. They can be seen in butterfly houses but the experience of finding them in the wild is far better. 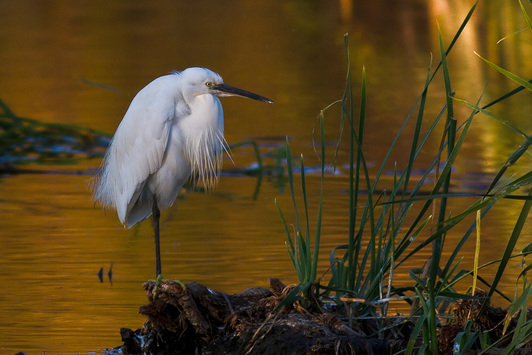 Little Egret - egretta garzetta
A Little Egret standing on one leg made a nice shot against the glow of evening sunlight on the water at the Rio Velez in Torre-del Mar. So it is November´s best photo so far, but hopefully more and better to come. 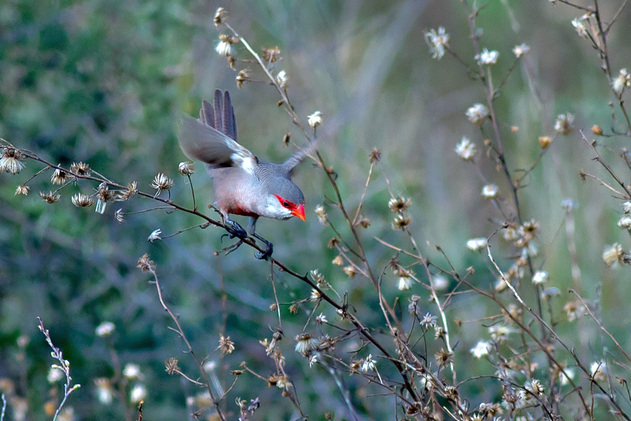 A little cheating going on here. I cannot decide which photo I prefer, the waxbill or the egret. Well this is my blog and I can do what I like! So here is the Waxbill as a second photo for the month of November. This was taken in Quinta do Lago in Portugal where they were quite numerous. I have also seen waxbills in Malaga Province but they are not native Iberian birds, Sub-SAfricahowever but 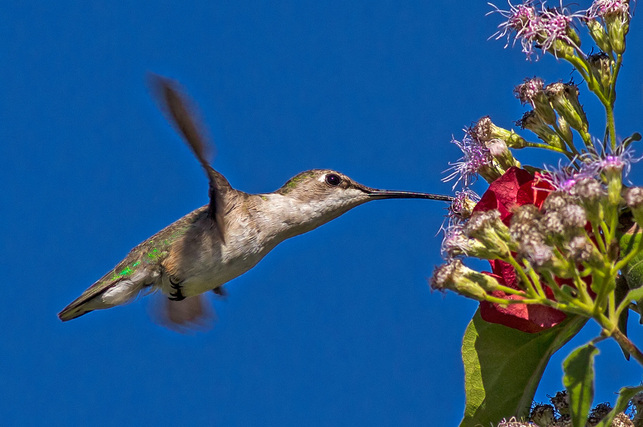 Ruby-throated Hummingbird - archilochus colubris
The Ruby-Throated Hummingbird is named for the adult male´s shimmering ruby red throat patch. Unfortunately all we ever saw were women and children, so no ruby red throats to photograph. This female still makes a good picture however as it hovers to feed on a tall flowering bush at Castellow Hammock, near Homestead in South Florida. If the sky looks very blue in this picture it´s because it is very blue, no enhancement here.